I Just Want You to Clean My Teeth! 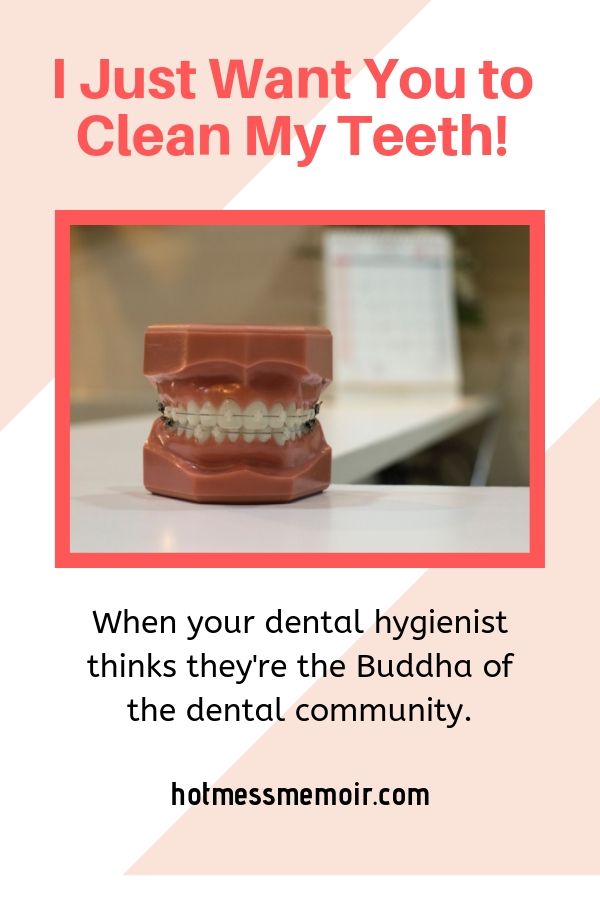 My youngest son has the dental hygiene habits of a ferret. It’s not uncommon for him to go days without brushing his teeth. During school, it’s pretty easy to remember to tell him to brush. During the summer, I can leave note after note and pray he does it.

So that’s why when we go to the dentist, it’s my day of reckoning. The dental office is my safe space where I have highly-educated adults, lecturing my children on why they need to brush and floss and the detrimental effects of your teeth falling out.

At the dentist office, my youngest and I were in chairs next to each other, separated by half a wall. The male dental hygienist explained everything to him. I just laid in my chair thinking,

15 minutes later, it was my turn to get my teeth cleaned. Full disclosure, I was tired and hungover. My husband and I had a date night the night before and I just needed sleep. Instead, Dr. Root Canal brought his “fun facts” to me.

You would have thought he was the second coming of Christ to the dental community. Or at least he thought he was. Here’s how just a snippet of the conversation went:

“And what’s the definition of insanity?”

“Doing the exact same thing over and over again but expecting different results,” I quickly said to get the ball rolling.

“What fingers do you wrap the floss around?”

“Ummm….the index finger?” I said, getting more and more annoyed.

I had to fight back the urge to hold up my middle fingers to this man. He then hands me a mirror and proceeds to perform the most painful flossing of my life.

“See, on your top front teeth, you need to go really slow and gentle. See this is my beef with many of my collegues, they tell but don’t show. Ok, so see how I’m taking the floss and going all the way down till the pocket stops?”

“Ah-huh,” I said as best I could when a grown-ass man has both hands in your mouth.

“You floss down to the pocket ending and go up.”

By now my son was back from the prize machine as I tasted the iron from my blood in my mouth. C took a seat in the corner of the room to watch my torture. C picked-up with the banter where it had been left off in the other room. As my son stated false facts about dental hygiene, this got Dr. Root Canal all worked up. You would have thought we told him we believed the world is flat. He began spouting off more and more facts I simply didn’t care about. When C announced he drank Gatorade, I thought Dr. Root Canal was going to lose his mind.

“Coffee has an acidity of 4.5. Apple juice is 3.8. Gatorade is a 2 and do you know what battery fluid is?” He asked me with the same seriousness of a historian in the Davinci Code.

“1.7,” he said. He was the type that felt they needed to stare at you 2 seconds too long to ensure you’ve heard their point, loud and clear. “You’re basically drinking battery fluid,” he said while throwing his hands in the air.

I was over-the-top annoyed now. Every time he would turn back to me with his dentist tools, I’d open my mouth, thinking he’d clean my damn teeth and finish this shit show. Instead, he’d think of more useless knowledge and say it.

“Just clean my teeth!” I wanted to scream.

He was like the nerd of dentistry. If you went to his home, he would have teeth chairs in the kitchen. There would be posters all over the wall reminding you to brush. His living room would resemble that of a dental office’s waiting room and every night he dons pajamas with tiny little tooth fairies.

While I appreciate anyone that is passionate about their job, I’m not appreciative when they try to instill this passion on me. Just do a good job and don’t act like some damn know-it-all that’s better than everyone else.

Have you ever had someone like this? Whether it be a hairdresser, doctor or another professional? Just because your passion is cleaning crud out of teeth doesn’t mean I’ll share the same enthusiasm.