Blogging Getting to Know You Pop Culture Work

5 Reasons I Call Bulls*** on the Experts 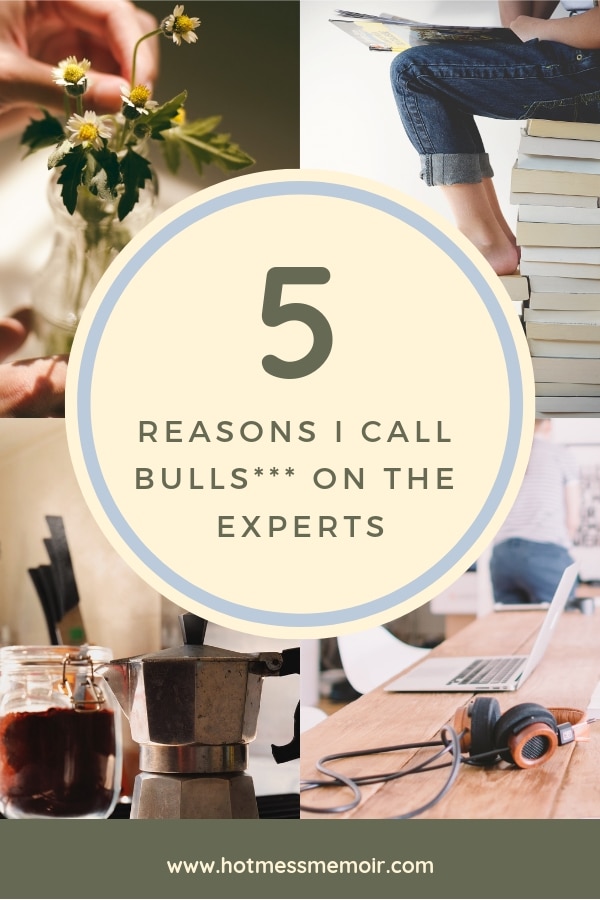 I don’t know why but I had an epiphany just now and thought I’d write about it. It’s about the “how to’s” of this world, written by so-called experts. And in the blogging world, there are many. I mean, within 10 seconds on Pinterest, look at what pops up when I type in how to make money blogging:

The epiphany came when I realized that these aren’t the only snake oil salespeople. Every “how to” I’ve ever Googled and been baited with super catchy headlines, falls into the same bucket. I mean, think about it:

“7 steps for landing your dream job!”

You know, it’s shit like this that again, that makes us feel inadequate. We feel like failures when we still have an 8 gallon drum as our stomach instead of a 6-pack, 30 days later.

Things Experts will Never Tell You

There are several things that experts will NEVER tell you that is a factor to your success in all these of these ventures. Again, calling bullshit on the whole “be the change you wish to see in the world” stuff. Because sometimes, other people’s behaviors have an impact on you and no matter how least whiny you are, it does play a role. Here are things that almost always have an impact on your success. Some are up to us, others aren’t.

Sometimes, no matter how hard one tries, your genes are like, “fuck you girl, you’ll never see your ab muscles again.” The experts would NEVER tell you this in their article that features a 98 pound waif, pulling off a belly buster exercise.

Sometimes you either got it or you don’t. What these “I made $1,000 blogging in my first month” articles won’t tell you is that if your writing is shit, no one is going to read. You can do all of their steps and you still won’t make a dime if you lack the talent. Harsh, I know. But seriously, I would never walk into a singing competition and belt out the national anthem, all because I’m following steps on how to become a better singer.

I know you followed the steps on how to nail that interview but at the end of the day, they pick the best actor/actress (aka bullshitter). They pick the candidate they think will mesh best with the team. Skills are almost an afterthought. If you’re the most qualified but don’t mesh, your out. Why do you think the term “over-qualified” was invented? Ok, so maybe it wasn’t invented for this reason but that’s the term I’ve heard before, as a polite way of letting you know you didn’t get the job.

Look, just because you slap an Avon decal on your car, doesn’t mean you’ll be the next pink Cadillac driving director of Avon. Just because you took an adult class on life-coaching doesn’t mean you’re the next Tony Robbins (still don’t understand what that fucker does). You’ve got to eat, sleep and breathe your desire. I’m sure my blog could be bigger but what am I doing instead of growing my blog? That’s right ladies and gentlemen, I’m on season 3, episode 2 of Shitt’s Creek. Or I’m in the rabbit hole that is YouTube.

This is my favorite factor when determining success in everything. I would love to know how many famous people got to where they are because of dumb luck. No, no, no, I know many of them worked their asses off. I’m talking about the ones that were in line at Starbucks behind a casting director who “liked their look” and before you know- a star is born. How do you think some things go viral? I liken it to a slot machine when you pull the handle down and the numbers and symbols are spinning. The spinning slot machine is the equivalent of your work (be it a book , a YouTube video, blog post, art) posted on social media. When the numbers stop spinning, your post may have been shared by an influencer then his/her followers share it, so on and so on.

So tell me, is my list fair? Do you agree? Disagree? I want to hear from you and if I missed anything.