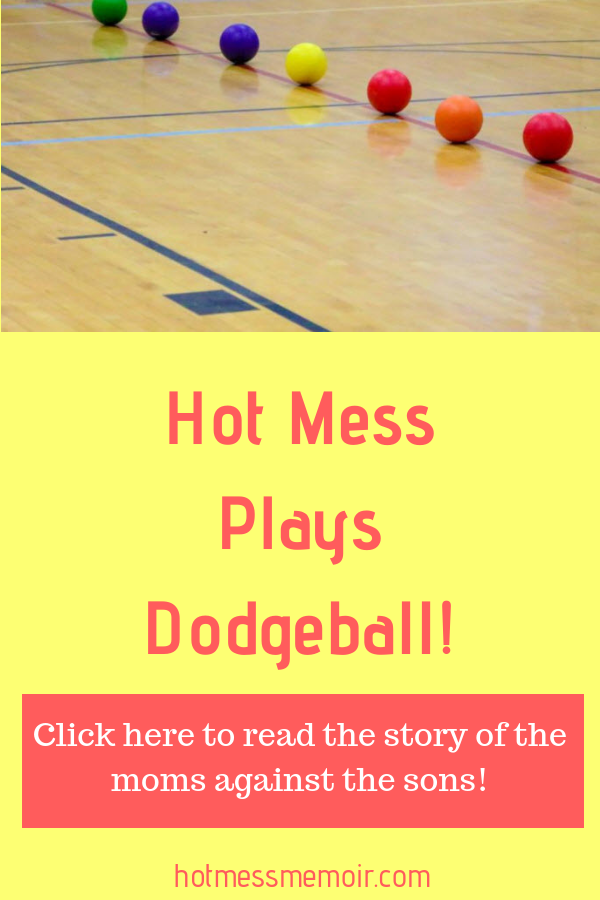 To say I’m athletic is to say that the John Legend and Chrissy Teigen holiday special was magical. Both are a lie and it’s ok to accept it.

This is the second dodgeball game I’ve attended. First with my oldest and now my youngest (9-years-old) had his this evening. It’s held in their gym and for about an hour, we throw balls at each other.

I decided to get crafty for this one and make t-shirts for my friend and I whose son is my son’s best friend. Hell, if we were going to suck at it, at least we’d look like we were professional dodgeball players.

“Ok, no ball hitting,” the gym teacher told us as we sat in the bleachers. All the boys sighed simultaneously.

“What’s ball hitting?” I wondered out loud. Obviously the other moms were clueless too because no one answered me.

“But you can hit people’s heads,” the coach continued. Again this produced noticeable signs of agitations in the boys. Apparently they aren’t allowed to do this in school. I deduce this was allowed as a way for mothers to release pent-up anger. What better release then to hit children in the head with balls? My blood pressure went down just thinking about it.

Last time I played, I enacted one of those scenes where in a blaze of glory, I run across the line of boys, throwing balls at all of them while they are hitting me. In my mind, it was in slow motion and bit more dramatic. In everyone else’s eyes, I just looked stupid.

I was hit with a ball within the first 15 seconds. Frustrated, I vowed to get them back during round 2 as I took my place on the bleachers.

Enthusiastically, both boys and moms took their places along the walls. I took a different tactic and placed myself behind 2 mothers. Sure, I’m adding 0 value to the team but at least I’ll stay in longer. I’d say I lasted 1 minute this time.

Returning to the bleachers was always an enjoyable walk as you were treated like one of those encaged golf carts that everyone tries to hit on the golf course.

‘I’m already out!’ I wanted to shout so they’d quit hitting me.

As I returned to the bleachers, my friend NC was there to give me a well-deserved hard time.

“Well, looks like the gym’s really paying off for you. All the training you’ve done for this.”

I was pissed. My son made me remove the white headband and piggy tails I had put on before the game. I secretly brought the headband with me and found myself putting it on in sheer defiance. Here’s yours truly at her best…..

By round 4, the enthusiasm was noticeably different between the boys and the moms. While the boys ran to the wall when the horn blew, the mothers still sat on the bleachers debating on whether to sit this one out. Slowly though, we made it to our starting lines.

And can we discuss my “throwing technique”? I don’t have one. As I would throw a ball, I knew how far I wanted it to go, however, my range was between 3 and 5 feet. Then you had the former college softball player that was all in and she scared me a little. She was out for blood and lasted longer than most moms.

Some of these kids threw death balls. I couldn’t believe how far and how hard they threw. There were a few times I had to duct or bite it. The balls were soft however the speed they were coming would have been painful.

We dragged ourselves to the starting position. One mom picked up a ball, tapped her shoulder with it, announced she was out and walked back to the bleachers. By now, I could last 2 minutes in the game, hiding behind other moms, throwing balls at them then running like the wind back to the wall.

Eventually the moms came up with our first strategy. We would all get balls then at the same time, charge the boys. This worked the first time until they caught on to the plan.

I decided to take one for the team and become the sacrificial lamb again. I figured if I walked out in front of them, they would all try to hit me at the same time thus relinquishing all the balls. I strolled out slowly, arms held up at my sides.

“Come on boys. I’m right here. Hit me! Hit me!” I taunted. They looked at me as if I had 2 heads. Obviously things didn’t go the way I wanted and only 1 boy at the end of my walk of shame hit me.

“Make me proud. Do what we couldn’t do. Annihilate them.”