Getting to Know You Pop Culture

4 Things I Hate That Everyone Else Loves 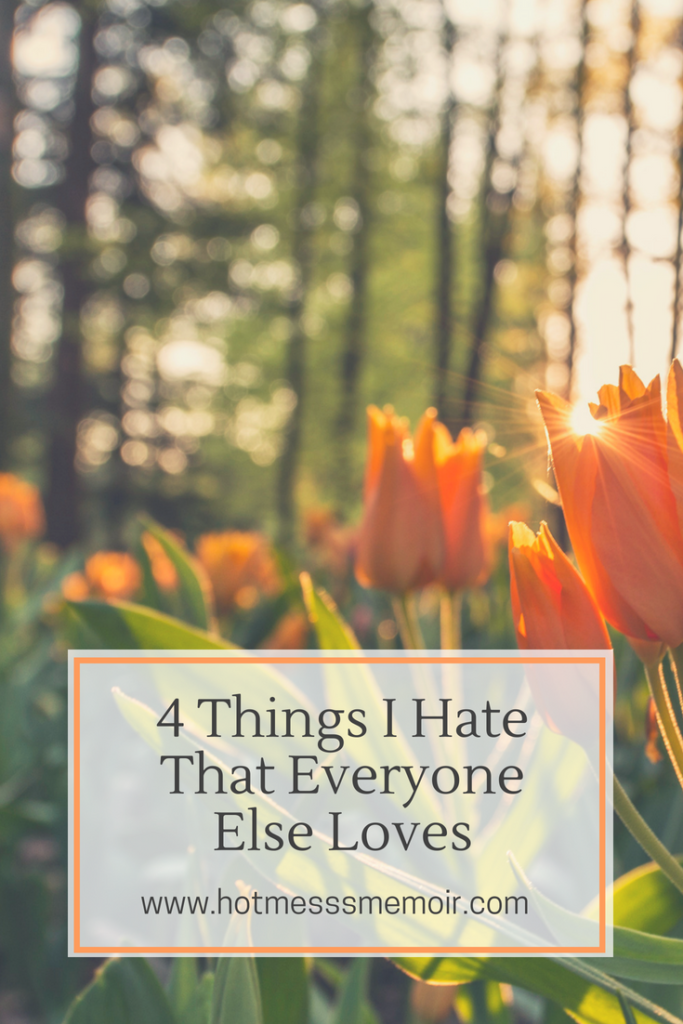 This post was inspired by a segment on Matt Bellassai’s Podcast, Unhappy Hour. If you haven’t checked it out, Dear God you’re missing out! I mean, when you have an episode entitled, We Smell Like Beef, how is it not going to be funny? Anyway, when he interviews guests, he asks them what is one thing that everyone else loves that you hate. This got me thinking about the things I hate that everyone else loves. It doesn’t make me a curmudgeon, just what I would like to think is an honest person. Don’t get me wrong, on a few of the below, I’ve tried to like them, I just don’t. Here is my list. Now, I want to hear in the comments what is something you hate that everyone else loves!

I’ve never watched an episode nor do I intend to; ever. Sure, I’ve flipped the channels, came across an episode, watched approximately 13 seconds of it, rolled my eyes and moved on, but I’ll never watch this stupid show. I don’t need to see women and men with the IQ of a tennis ball (collectively) fight over a person they’re going to divorce in 5 years anyway. For the few seconds I’ve watched this show, I’ve lost brain cells. Like legit, I’ll look for my car keys after watching 10 seconds and can’t remember where I put them. Why? Because the Bachelor and/or Bachelorette has dumbed me down. It really should be a scientific experiment. Like we could torture terrorist with binge watching this show and after a weekend of viewing it, you’d open their cell to find them a drooling, shitting mess of a baby. We could end terrorism with the Bachelor/Bachelorette. Hmm…..ok, maybe I’m on to something.

Anyone that declares, “oh, I just love sushi” should honestly be punched in the throat.  Food love is reserved for only the following: all red meats, especially filet mignon, pizza, any sort of potato, coffee, wine and baked goods. Sushi is like a science experiment gone incredibly wrong.

“Dr. Sushi, what are you working on this morning? Have we figured out how to eradicate hunger from the planet?”

“I think so! I’ve developed a recipe that only requires the addition of rice!”

“Well Dr. Dolittle you see, I take Earth’s abundant resource of seaweed, lay it flat and top with rice. Next, I take a scraper and scrape all of the fish particles, giz and anything else that fell to the bottom of the sea and lay it on top of the rice. I then roll it up.”

“Interesting. What are you calling this scientific breakthrough”

“Well my good fellow, I’m thinking of naming it after myself, Sushi! And the best thing? Until the planet gets hungrier, I have about a penny in each roll, I can sell these turds for roughly $2 a roll!”

And for anyone that pretends to be more cultured than me because they “love” sushi, guess what? Jokes on you. I’m not the one eating fish giz with a side of ocean weeds.

All the housewives! Whoever created this show should be taken to a deserted island and left to fend for themselves. I don’t care if it’s housewives in Atlanta, NYC, LA or the trailer park, this show is the worst. If I wanted to watch people fight like cats and dogs, all I have to do is go into the next room and watch my sons fight like gladiators to the death.

These women aren’t even what most of America would deem housewives. It should be called the Real Trophy Wives of _________. And they aren’t even trophies/humans as their flesh to plastic ratio is in the ballpark of 40/60. These women remind me of those creepy Japanese robots you see on documentaries where a nerd has fallen in love with them and the robot’s mouth is this odd, thick-lipped “O”. Which let’s be real, that’s something the housewives and the robots probably have in common.

Calling your significant other babe

God this gets on my nerves.

“What time is the parent teacher conference babe?”

Ok, I’m turning the tables, what is 1 thing everyone else loves that you hate?