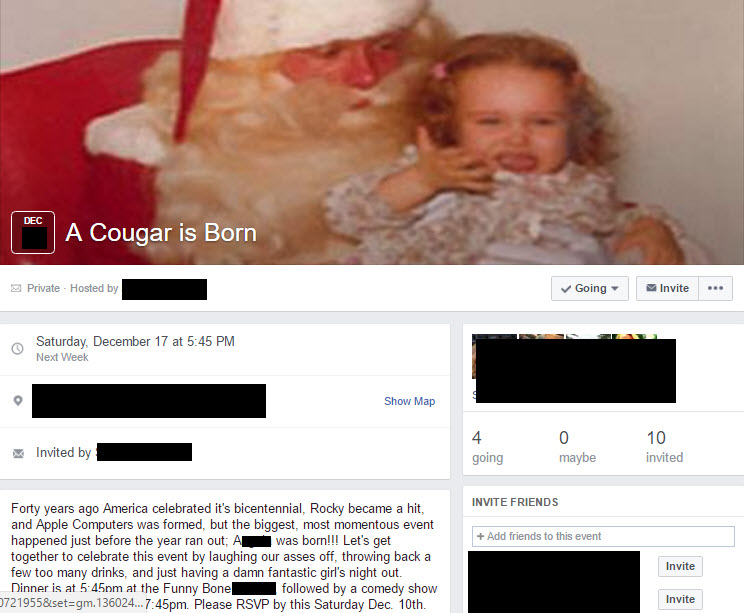 So here is part 1 and part 2 of my birthday evening with friends and relatives. As I left off, my sister and I were walking back to the hotel, very drunk but felt we needed to enter the territory of extremely drunk. My sister had become somewhat defensive, telling me she was going to smoke a cigarette and this should have been a red flag for what was to come.

We headed into the sports bar of the hotel. It was dark, with cherry wood walls, retro sports pictures and memorabilia. Surprisingly, the restaurant area was pretty busy but the bar was empty except for a couple on the right and 2 business men on the left  of 4 empty stools. We took our seats and ordered another round of Cabernet.

“I had so much fun tonight! Thank you!” I said, sincerely grateful.

“Your welcome,” she said.

We looked up at the t.v. playing CNN, something about Trump’s cabinet picks.

“He won because people like me voted for him.” I said.

“Excuse me?” She asked as if I had just declared she was ugly.

“Yeah, I voted for him. Your welcome.” I said pointing at the bar to emphasize my point.

From there I can’t really remember anymore of the dialogue other than me accepting my sister’s challenge of telling the entire bar I voted for Trump.  So I stood on the stool foot rest and yelled, “I voted for Trump!”

A few people cheered and the man of the couple next to us, leaned over while cutting his sandwich and said, “I voted for Trump” and shrugged his shoulders.

At some point we headed to the elevators in which in my twilight like state we continued to argue. I came to realize later that during the argument my sister hit my back. Yes, she HIT-MY-BACK. What a nightmare she was turning out to be. She started to cry.

“Are you crying?” I asked. I then thought it a good idea to begin mocking her in which she became more pissed.

The next vague thing I remember is her calling my cousin F in the hotel going on and on about me voting for Trump.

“Wait….are you tattling on me?” I asked in complete astonishment. She continued to whimper like I had killed her cat or something and I continued to mock her.

“Ya know what? Ya know what?” I yelled at her, attempting not to sway in my full on drunk, “I’m done! I’m so done! I’m packing my shit and sleeping in my car! YOU HAVE RUINED MY BIRTHDAY! RUINED IT!” I screamed, the last part came out shriller than I had anticipated. I marched around the room packing up all my clothes, angrily throwing all of it into my pink bag.

“Have fun with Hillary you stupid cry baby!”  Was something along the lines of what I yelled as I walked out and slammed the door.

Once in my car, I dialed my husband and lost my mind. I mean LOST IT, holding nothing back. I invented names to call my sister. I mean, who ruins someone’s birthday over politics? That ass hole, that’s who. I dropped more F bombs during that conversation then the entire state of Virginia probably had for the year. Then I became cocky and declared to my husband that that was my hotel room and I’m going back up there as she could kiss my ass.

And so I did- I marched back up for more. I go in, slam the door and announce something like, “this is my fucking hotel room and my fucking birthday so go have fun with Hillary!” I then pass out on the bed.

About 20 minutes later I awake to find my sister’s boyfriend S, standing over me grinning in disbelief.

“Wait, what?” I say surprised, looking around the room. I quickly do a check with my hand to make sure a boob isn’t hanging out or anything, aware he’s there. S is still crying and now she is packing her things.

“Why are you here?” I asked, knowing full well why.

“She’s upset so she called me to come pick her up,” he responded.

“Yeah, that’s about right,” I said, rolling back over, even more annoyed.

The next thing I know is I hear S screaming in the bathroom and a huge crash.

“Just leave it! I’ll clean it up!” I heard her boyfriend yell/whisper, seconds later. Again, everything was a haze and my senses were too dulled to show immediate concern for what just happened.

Five minutes later they were gone and I was still angry. I sauntered over to the mini fridge and flung it open to find her club sandwich box from earlier that day. I grabbed it and went back to bed.

“Fuck you S. You gonna ruin my birthday, I’m gonna eat your fucking club sandwich.” I said defiantly as I flung the lid open. I HATE leftovers. The only leftover I eat is pizza and it cannot be older than 24 hours. It’s just a weird, OCD thing I have. I think I thought I was really sticking it to her by eating her forgotten club sandwich.

Completely full and having to use the restroom I suddenly remember the crash. I walked in to find this lovely destruction: 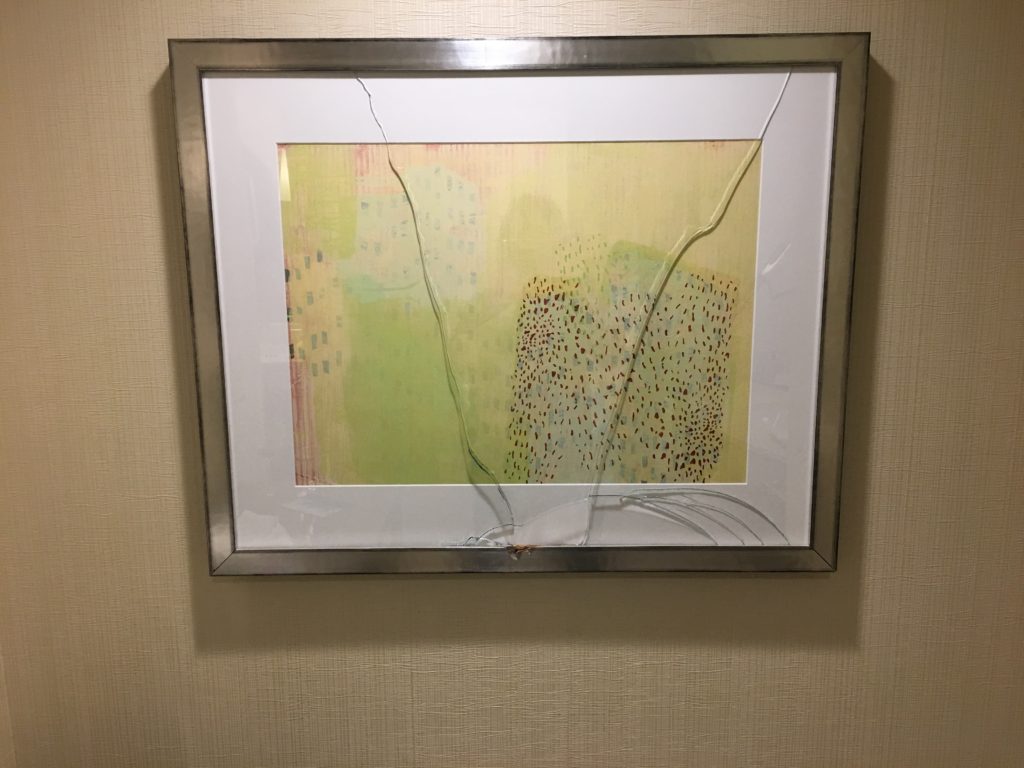 I immediately text the following to her boyfriend S: 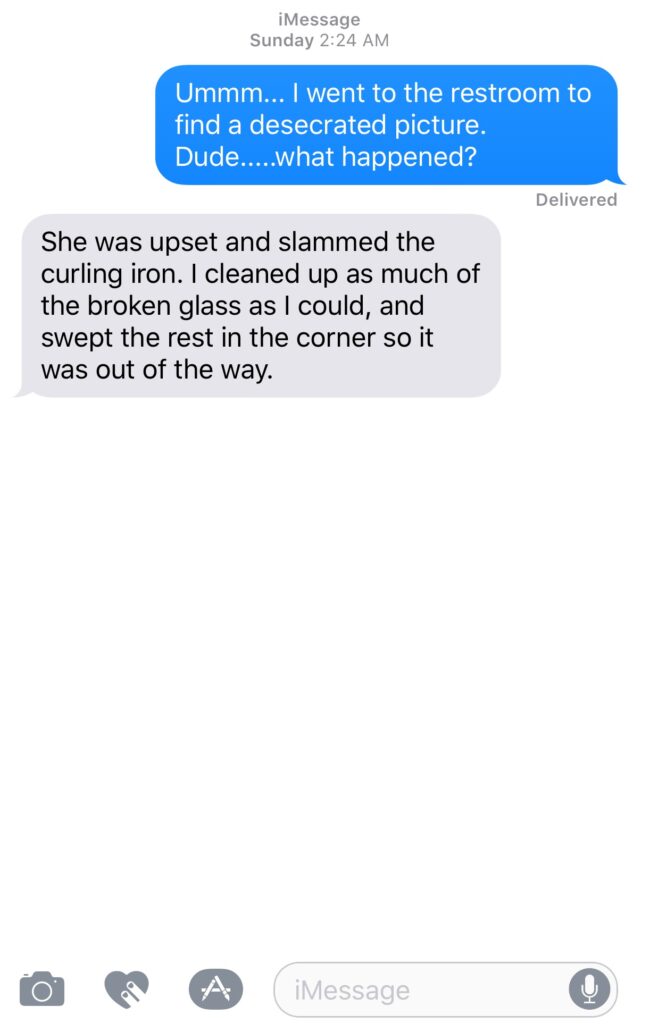 I eventually fell asleep and awoke 6 hours later to an Alicia Silverstone movie playing on the tv. I made myself presentable and headed down to the restaurant for my free breakfast…..and to tattle on my sister.

‘Do I tell them? Will they let her off the hook if I come clean? Will they think I did it? Is it worst if housekeeping finds it?’ These were some of the things running through my head as I rode the elevator down.

I turned the corner to the make shift front desk located in a ballroom to find 4 Hilton employees. Surprisingly I became very nervous but was still angry at S. I took a deep breath and announced to all of them,

“Yeah so my sister decided that my birthday was the perfect time to discuss politics and we don’t agree. So much so that she felt it necessary to throw her curling iron at the picture in the bathroom,” I turned my camera around and held it up to show them the picture. Simultaneously they all scrunched their faces up like I had just shown them a gigantic zit being popped up YouTube.

“You’ll have to talk to him,” the guy said that had accepted my bribe….I mean tip, the previous day for the upgrade. The man he pointed to was pretty much the last person on the planet I wanted to tell that we had damaged one of this hotel rooms. He was wearing a 3-piece suit, probably in his 50’s, completely bald and chiseled, giving the appearance of ex-military. He glared at me as if I were Satan himself. He had heard my story and walked over to me.

“So you want to pay for it? You want to give us a credit card?” He asked as if this were a business transaction.

I chuckled a little, “oh heck no. I’m not paying for her idiocy. That is all her. Do you want her info?”

“Was the room on her card?” He asked.

“Yup,” understanding what he was getting at.

“Then we have all the info we need,” he said conspiratorially.

And should you ever have a diva moment in the future, don’t ruin a picture at the Hilton because it cost S $250.