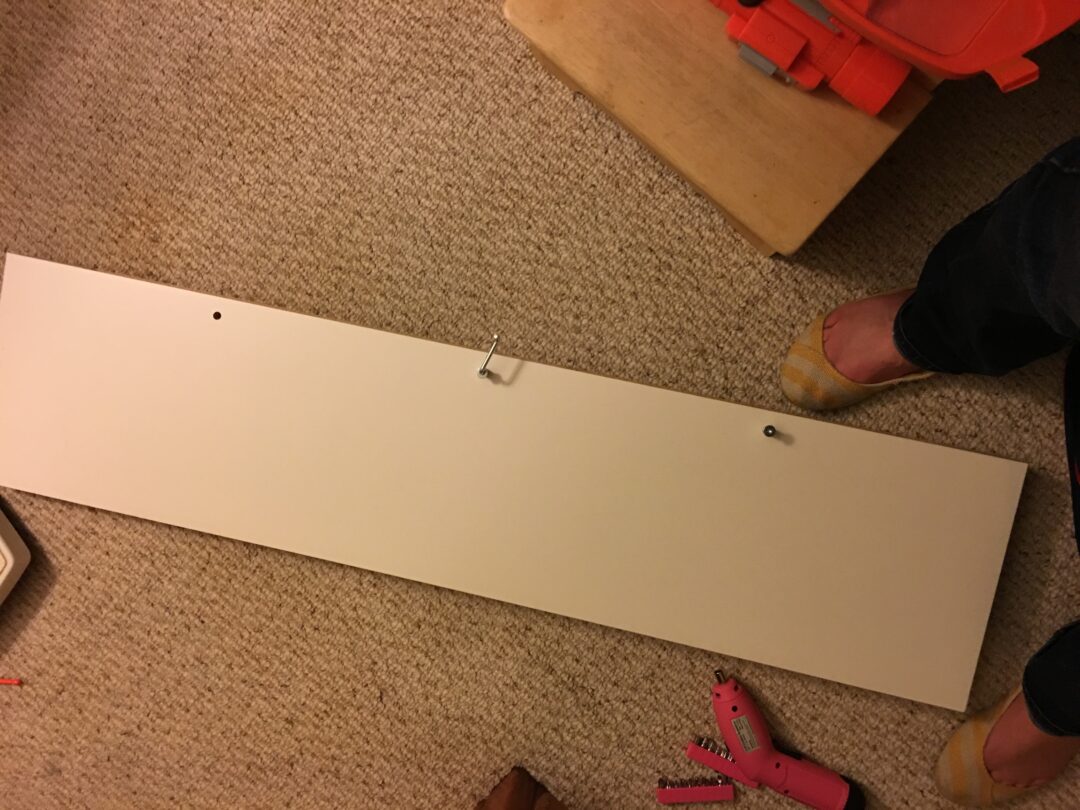 I can barely type as my fingers feel like they have arthritis and my back is sore. I’m slowly coming off a home improvement rage. I was so hopeful and bubbly this morning when I purchased my very own toolkit. 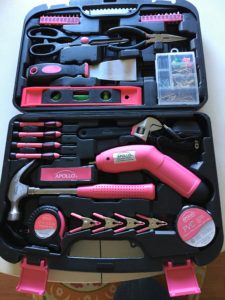 I was slightly disappointed as my husband informed me that my drill/vibrator was not capable of drilling holes and I would indeed be using his drill.

“Then why did I buy this stupid thing?” I asked him.

“I don’t know but it’s cute,” he said in a patronizing tone.

Normally I am more of a “try to make it as straight as possible and who needs a leveler” kinda’ girl but not today. I was going to do it right this time now that I had my own tools. 45 minutes later I was standing back, admiring my handy work. I was pleased with my work and saw no reason wy I couldn’t move on to project #2.

We’ve had 2 white shelves from Ikea sitting in our closet for 2 years. No matter what, I was going to hang at least 1 tonight with my new found skills. In an effort to prepare, I decided to find the shortest video possible on YouTube, just to be able to see what went where and to better understand what I was doing.

After my 2 minute, 23 second video was complete I marched upstairs determined to flawlessly hang a floating shelf.

14 holes and 45 minutes later, this is what I had accomplished: 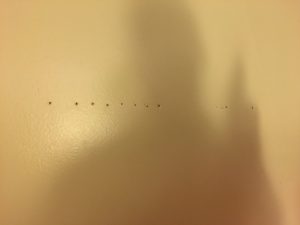 Funny thing….turns out I actually needed to be drilling into studs to anchor the shelf. Had Ikea actually used words in lieu of pictures to tell you how to hang the shelf, I could have avoided 14 holes. But no, Ikea products are bought in 4,000 countries, Mars and the moon and therefore only pictures will do. It also doesn’t help that I have NEVER done any home maintenance. I think some of you remember this debacle: Ill-Equipped To Paint a Mailbox. Up until today, I’ve taken no initiative to learn any sort of home improvement so my skills are on par with that of a toddler using a Little Tikes My First Toolbox. And given the damage I inflicted, maybe that is the toolbox I should have bought.

Eventually, I broke down. I just put my head against the wall and began to bang it slowly. After a few seconds, I lost it as my frustration turned into anger. I grabbed the drill.

“I’m gonna drill this mutha’ fucker!” I said, loosing the last shred of composure I was holding together. I held the bracket flush against the wall and began to drill the screws in to which ever hole would easily accept them. I said a silent prayer that when the shelf fell, it didn’t ruin my son’s trophies, or cause a concussion. 5 minutes later, the bracket hung loosely against the wall. Maybe it was the constant drilling or the crazy babble coming from C’s room but my husband was now standing behind me, watching me unravel.

“Not good!” I barked. “I’m not cut out for this. I CAN’T DO THIS! I need this shelf,” I pointed to the bracket, “to look like that shelf!” I said pointing to the other shelf in the room. He had successfully hung that one a few years ago, minus the 11 extra holes.

So all the above went down yesterday. It’s a new day and I didn’t give up. Sure I drilled an additional 4 holes but I used a stud finder my husband finally found in the garage. Here’s the finished product: 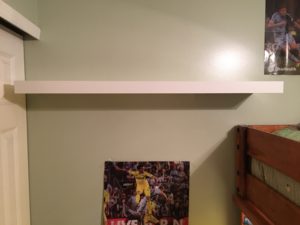 So now that I am an experienced carpenter, if any of you need a handy woman and don’t care how I get the job done, you know where to find me! 😉