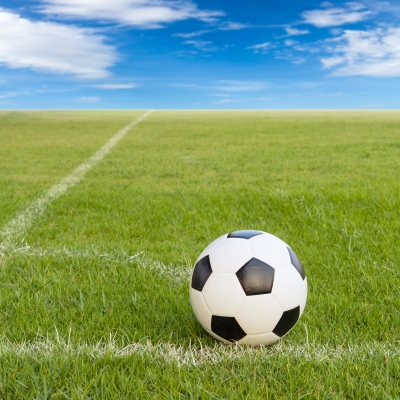 Things have gotten heated at soccer games before. These altercations have resulted in parents being removed from the sidelines, the coach getting a yellow card, a referee yelling at us to the point where he’s almost in tears or a combination of all of the above. The game on Saturday was officially the worst.

We have had this ref before and to give you a visual of this man- it was essentially Santa Claus. I decided this is what Santa Claus does when he’s not cramming his fat ass down the chimney to deliver presents on Christmas Eve. This guy was a jerk; the ref, not Santa Claus, and actually made one of our boys cry last season. A boy that is an absolute angel in my book.

So on Saturday, the hoopla began when a kid from the opposing team began to yell at the ref’ that the last play should have resulted in a foul. Obviously he was persuasive enough because after the kid was done crying like a little baby, the ref blew his whistle. This pissed my son off who decided it would be a good idea to yell at the ref as well but with more gusto and hand gestures, allowing the Italian to come out.

“What!? Your gonna let that little kid tell you what to do?” My son screamed with his hands in the air.

“Son!” The ref said sternly with a bit of crazy in his voice. “You better keep your mouth shut or you’re gonna end up in the parking lot!”

My son slapped his hands down at his sides dramatically, shook his head and jogged away.

Not to be outdone by his son’s outburst, my husband decided he too would get in on the action. When the game was over, my husband walked to the middle of the field and literally waited for Santa to finish doing whatever refy thing he was doing with the other refs.

“What the hell does he think he’s doing?” I said to no one in particular.

When St. Nick had completed his ref duties, he began waddling closer to my husband just as my husband took a few steps towards him.

“Hey you gotta minute?” My husband said, not necessarily giving the ref an option to give him a minute. “I’m going to say this as calmly as I can. If you ever talk to my son like that again, we are going to have problems.”

“Your son was out of line SIR.” Santa said.

I couldn’t make out what the ref said next, all I know is it is what officially set my husband off. In the most eloquent manner that would have moved Maya Angelou to tears, my husband responded with the following…

“Listen up you piece of shit, I’ll say it again, you talk to my son like that again, I’ll take you out to the parking lot!”

One parent from the opposing team started yelling at my husband, the ref and now 2 additional dads from our team. A soccer mom from our team also found it a good idea to whip out her camera and begin recording. I have requested the footage and to this day she has ignored me.

In an effort to diffuse the situation, I was about to perform the tap dance routine I never learned in ballet. I would learn later another soccer mom was about to pull up her shirt. She grew up in Europe so perhaps that is how altercations were handled? I had my old lady bra on that day so flashing wasn’t an option.

Diffusion came when another soccer dad began to yell at the opposing team.

“This beef isn’t with you! Walk away!” He screamed.

His wife then yelled the following to him,

“Damn right woman I’m a 50 year old man and I can do whatever the hell I want!” He returned as if puffing his chest would work with her.

“These are children! If you do not get in the car right now, so help me….” She trailed off, shooting him an ominous look. Suddenly the entire soccer field had been silenced with this battle cry, realizing Tom had better get the fuck out of there before her head exploded.

Tom sheepishly put his head down and walked toward their white minivan.

In the end, punches were not thrown, I ear-muffed 4 little ears and my husband regrets his choice of words. I’m still trying to get the video and lastly there has been a letter sent to wherever the soccer Gods live to request Santa is no longer our ref.

And that concludes this week’s episode of DAYS OUR CLEATS.