I have gone to the same place for my birthday since 1989: Japanese Steak House. By the way, my birthday is 12.28.76 should you wish to send me a gift. Anyway, it’s a no-brainer and this is my place. Friends and family don’t have to ask where I would like to go for my birthday because no other establishment is an option.

Then I get the below text: 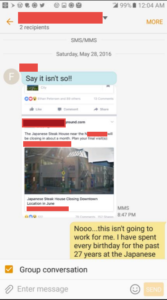 Like someone trying to understand where God came from, I couldn’t quiet grasp this concept. Surprisingly I don’t think much of it until my husband did one of the most romantic gestures he has ever done. He books us a table yesterday at Japanese Steak House, 1 week before it’s closing.

I didn’t realize yesterday would coincide with one of the nation’s largest gay pride parades. I’ve been in other cities during this event and occasionally had to go downtown and really only thought of it as an event occurring while I’m doing something else. Yesterday evening, my date and the parade would collide.

I offered to drive downtown since my husband’s city driving skills are on par with a 108 year old. Add in an additional 2k of folks running around and I wasn’t about to have a manslaughter case on my hands.

As I turned the corner on High St. we are greeted by 2 tall drag queens rocking high boots. I love me some drag queens. They put the F in fabulous. Suprisingly I find a parking spot pretty quick. We walk next to a family begging for money with 2 small children. I felt like an ass hole because I had 0 cash on me. Broke my heart even more knowing I was about to gorge myself and take home a massive box of leftovers.

Our table wasn’t ready yet so we took a table in the lobby bar, next to the floor to ceiling windows.

Oh my god the people watching! Like pulling up a tv tray to the living room to watch a show you’ve been dying to see; I wanted to tell the chef I would be taking my meal in the bar tonight, at this table, by the window that would be acting as my tv. The window was a massive train wreck we couldn’t take our eyes off of.

My favorite entertainment was when, out of the corner of my eye I saw an 8′ bean pole strutting in his American flag platform shoes, American flag bootie shorts and tank. He had an Uncle Sam hat on and glasses. He must have saw my stare as he stopped, grinned a huge toothy grin and waived uncontrollably. I was so charmed by this Where’s Waldo-esque individual that I smiled back and mimicked his wave.

As a thank you for our response, he regaled us with a special dance. He jumped to his left, bent down and began to twerk…..and twerk….and twerk. To show my appreciation, I over exaggerated a clap. Simultaneously I was trying to get my camera out to take a picture of him but couldn’t figure out how to do so. Then he left. Goodbye Gay Uncle Sam. Tear.

The next group was several lesbians who’s dress sizes varied from 12-20 yet dressed as if they were a size 0-6. Oh my God, we’re talking bandeaus and bootie shorts, exposing massive leg tats. I saw A LOT of camo and more ear disks then I want to see in a lifetime.

Eventually our table was ready and I had to leave my prime seat. We were sat with a family on our left and 4 guys on our right. I was really hoping we would be sat with 4 gay men as I find them generally to be extremely fun, hilarious and interesting. Instead, our 4 guys were the biggest nerds we would ever meet. Why nerds you ask? Because across the street, at the convention center just happened to be Origins Game Fair; a convention for adults who eat, sleep and breath video games. You know you are in the presence of nerds when convention sponsors include Dungeons and Dragons and Pokemon. Our fellow nerds had crossed borders (Canadian) to make this event and had been playing video games for 4 straight days! All of them were overweight, wearing either a Hawaiian shirt or an unbuttoned flannel shirt with a t-shirt. Half of them sported unkept facial hair and overall, a woman’s worst nightmare. The head nerd continually tried to converse with our cook who spoke roughly 10 words of English, responding “yes chef” and “no chef”. I’m sorry, Gordon Ramsey is not cooking for us here.

Towards the end I told my husband I wanted a menu to remember this place by and they would be giving me one.

“There not going to give you a menu,” he stated like it was fact.

“Oh really?” I challenged. I could tell he was skeptical but my rule of thumb is if you tell me I can’t, I have just that much more determination to prove you wrong. I went over to the host that has been the host for at least 2 decades and explained how I’ve been celebrating my birthday with them for 27 years. He was kind as always, thanked me for my patronage and handed me my menu. It was a great day.