I Saw Police Draw Guns for the First Time Yesterday 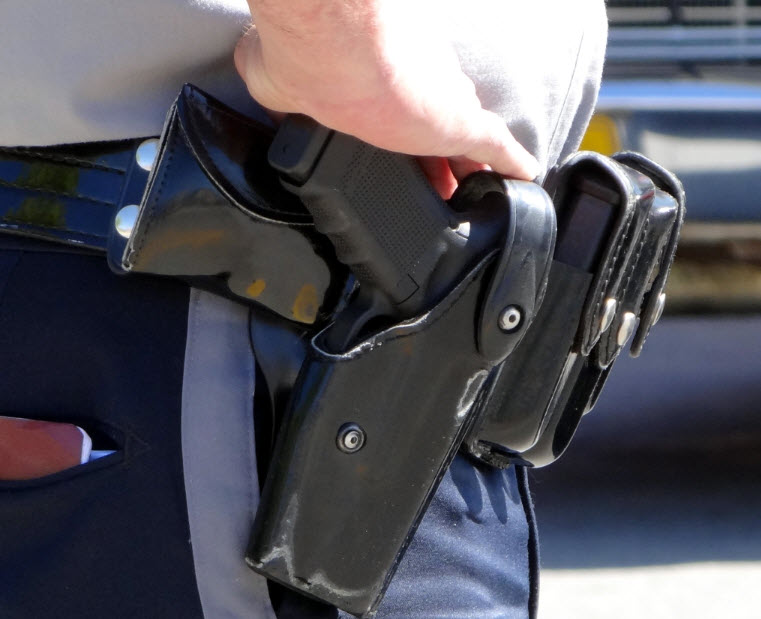 I don’t work in a horrible part of town, at least I would like to think it is an “up-and-coming” neighborhood which is hipster speak for “I really can’t afford where all my other hipster friends live so I’m going to live in this shit hole neighborhood and call it up-and-coming.

You want to know an easy way to determine if it’s up-and-coming? Count how many rainbow flags that are hanging. If there’s more than five it’s up and coming, if there’s only one, it’s too early to tell and you better just wait a few more months. My sister lives only 1 mile away from my work and when she first told me where her new house was and the first time I turned onto her street, I was in awe of how seedy a neighborhood she had selected.

Even the first day was a hot mess. As we were helping her move in,  a police van drove up, police got out and with a bullhorn, one of the policemen started shouting at a man running for his life to “stop and get on the ground”. Terrified, I looked over at my sister who had a look of terror in her eyes too. Her ‘what the hell have I gotten myself into’ look was was written all over her face.

After a day of unpacking, I kissed her goodbye and drove away. As I drove up the street, I saw not one, not three, but eight rainbow flags gently dancing in the wind. Suddenly I knew she was going to be okay. She was going to be alright.

Fast forward to last night when I was promptly leaving work in time to get home for my husband’s coaches meeting (feel free to read that little diddy here: My husband is on his period). There is a retail store that sits at the entrance of our compound while the offices sit farther back in another building. Just as I put my car in reverse, a police van rolled up and parked in the middle of the parking lot in front of the retail store.

My first thought was, ‘Hey ass hole, this is worst then parking in a handy cap. Move your damn van. You think you have special rights or something?’ My thoughts were quickly dismissed when 2 officers jumped out with their GUNS pulled!!! GUNS people….guns.

I get that I work for a Western company and they’re all into shoot outs and cowboys and the wild wild West, but clearly this is not the place nor the time for a shoot out. I have never seen police pull their guns out. I even stared at them making sure it wasn’t a walkie-talkie, a 1995 cell phone or a flashlight. No, it was the real deal. They were holding their guns and  prepared to shoot. I was officially flipping out by now.

As I drove away completely staring at them, I caught the eye of one of the officers. He gave me a “you better not tip them off or I’ll come looking for you” look.

Roger that, I was out of there. As I pulled away they continued to hold their guns while entering the store. By now, I had visions similar to a bank robbery. I nervously reached for my cell phone and called my coworker to see what was going on.

She answered on the second ring.

“Uh, this is going to sound really weird and I shit you not but there is a police van, andddd,” I was struggled to get the words out. “They have their guns pulled going into the store.”

Her reaction was half what I expected and the other half was unexpected as she seemed to act like this has happened before.

“Ok I’ll notify someone,” she said as if she had to come to a door to let someone on.

I began to rack my brain as to why police would have pulled guns and what the danger could possibly be. I began to make a mental list of all the people I knew that worked in the store and who seemed most likely to be running from the law. Sadly more than one person crossed my mind.

So was there an old fashion shoot out? No. The reason is beyond stupid and I’m embarrassed to tell you. I wish I had a better ending. After impatiently waiting for 10 minutes, I got the following text:

Have you heard of this? Police drawing their guns due to a panic button being pressed? In my mind a twenty something guy wearing his best American Eagle polo and khakis, named Tim is at a call center. Tim calls the store to confirm there is an emergency then things progress as needed. Obviously I was wrong.

I guess this is the price you pay for working in an up-and-coming neighborhood.